Restriction enzymes (REs) have been the workhorses of molecular biology for decades.1 Primarily considered tools of cloning, REs have found a place in some next-generation sequencing techniques that require efficient production of defined DNA ends for subsequent modification and ligation. For example, most flavors of genome-wide chromosome conformation capture use one or two REs to fragment DNA before dilute ligation of fixed chromatin complexes.2,3 Additionally, chromatin accessibility can be inferred by sequencing RE-digested chromatin4,5, though such methods are less popular than those which utilize sequence-agnostic enzymes like DNase-seq6 and ATAC-seq.7 Generally, if you want sticky ends to add adapters or labeled nucleotides, REs are the way to go.

In context of metagenomics, RE-based proximity ligation libraries have been of great utility in improving metagenome-assembled genomes8 and linking plasmids with their bacterial hosts.9,10 When working with a single organism that has a well-annotated genome, sequence bias can be accounted for by choosing an enzyme that is expected to cut at regular intervals across the genome, based on GC content or the known distribution of RE sites. Applying RE methods to a microbiome presents a problem - how do you choose an appropriate enzyme when there are many different genomes, or when the community composition is unknown?

Metagenomic proximity ligation sequencing associates plasmids with bacterial chromosomes, without the need to isolate and culture the host. (Made with BioRender)

To address this question, I looked at the frequencies of RE recognition sites across a collection of human-associated bacterial genomes…

Because this question concerns the choice of REs for metagenomics, I only considered REs that are commercially available and useful in context of the methods described. To that end, I downloaded a list of available enzymes and their recognition sequences from NEB and subset the RE list to exclude (1) enzymes with ambiguous bases at any position in the recognition sequence (the tool I use does not handle complete IUPAC encoding, only ACGT) and (2) enzymes that cleave outside of the recognition site (i.e. Type IIS enzymes). For simplicity, different REs with the same recognition sequence share the same index, even if they are not isoschizomers, yielding 14 unique 4-bp sequences, 60 unique 6-bp sequences (some representing nicking endonucleases), and 9 unique 8-bp sequences. The cleaned-up RE data are available here.

The human microbiome is one of the best-studied microbial systems, and the PATRIC database11 maintains a large collection of whole-genome sequencing data for microbes isolated from human hosts. Using a version of this database accessed in 2018, I subset the genomes to exclude those smaller than 1 Mbp and, for simplicity of visualization, included only bacteria from the phyla commonly seen in the human gut microbiome. In total, 59,579 genomes representing 6 phyla were analyzed.

I used Jellyfish to count all k-mers of lengths 4, 6, and 8 across the set of genomes. Jellyfish utilizes memory-efficient search of query sequences using hash tables and, importantly, does not double-count palindromes.12 Counts were parsed to extract sequences corresponding to the curated RE set, and I used a simple normalization to account for both genome length and recognition sequence length (n), with an added “0.1” to avoid errors when plotting zero-counts on a log axis:

Plotting RE site frequencies distributions for the six chosen phyla, it’s obvious that GC content underlies most of the differences in recognition sequence frequency at the phylum level. For example, looking specifically at 4-bp RE recognition sequences (figure below), GC-skewed recognition sequences like HhaI (GCGC) and BstUI (CGCG) are poorly represented across phyla whose genomes tend to be AT-rich, particularly Firmicutes and Fusobacteria. Likewise, the GC-rich genomes of Actinobacteria are predicted to be infrequently cut by AT-skewed enzymes like MseI (TTAA) and MluCI (AATT). Similar trends can be seen for enzymes with 6-bp and 8-bp recognition sequences. 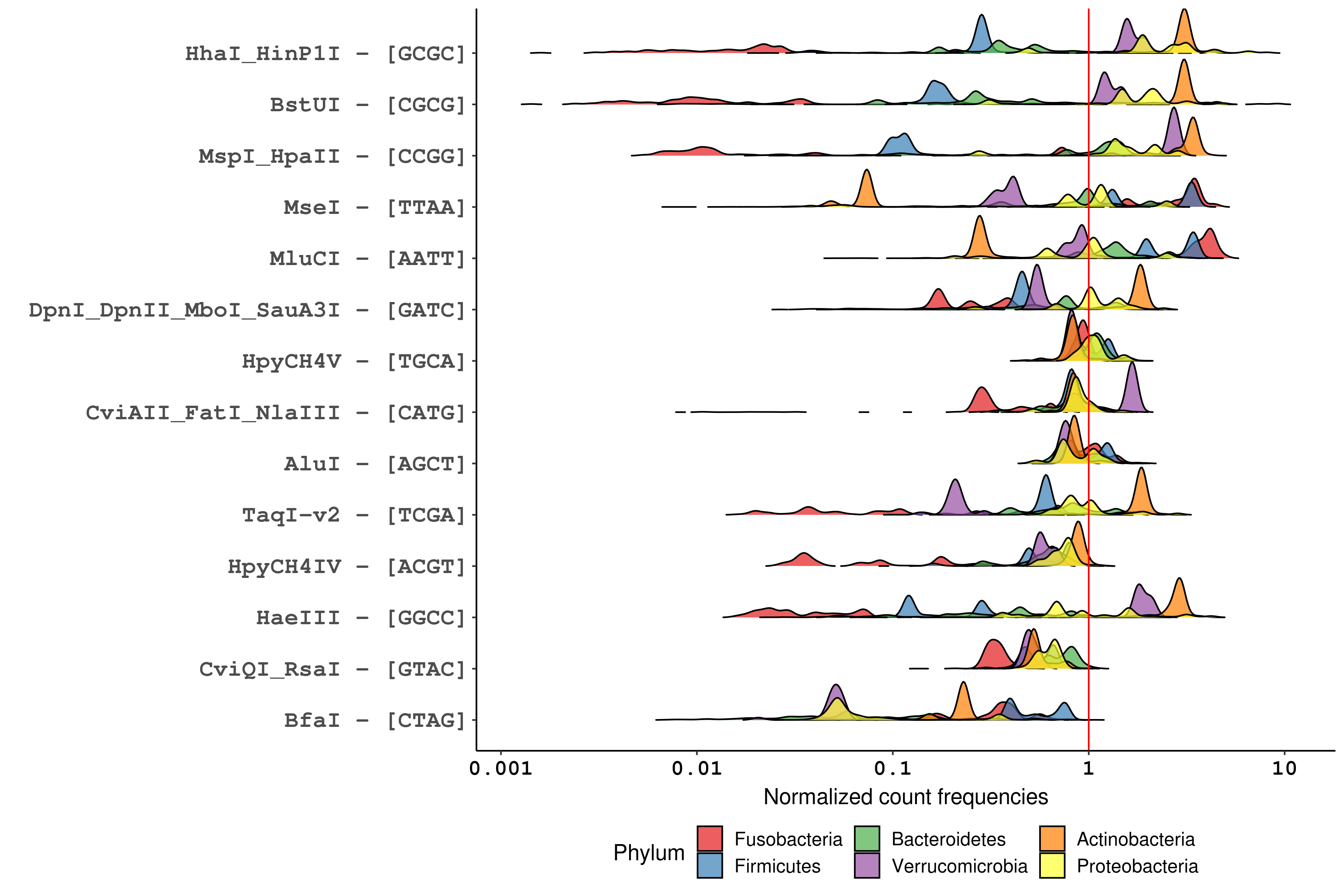 However, choosing a RE based solely on GC concordance between genomes and recognition sequences does not account for the biology of specific sequences. An interesting case is that of BfaI, which recognizes the CTAG tetramer. Despite having the same recognition sequence base composition as frequent-cutting enzymes like HpyCH4V (TGCA) and CviAII (CATG), BfaI is the least frequent 4-cutter across the bacterial genomes analyzed. Similar infrequency is seen for the 6-bp cutters that share a core CTAG tetramer, namely AvrII (CCTAGG), XbaI (TCTAGA), SpeI (ACTAGT), and NheI (GCTAGC). The relative rarity of CTAG is a trait conserved across bacterial genomes, and its specific depletion in protein-coding genes makes CTAG useful as a marker of intergenic regions.18 Biologically, the depletion of CTAG in bacterial genomes is hypothesized to be related to the use of rare codons as a mechanism of global gene expression regulation19,20 and may be consequence of sequence bias in VSP repair.21,22

So, what can we take from all this? For metagenomic proximity ligation experiments, particularly experiments involving human microbiome samples, there are several REs that are minimally biased, though no option is perfect. Concerning frequent-cutting enzymes with 4-bp recognition sequences, both HpyCH4V and AluI are evenly represented across diverse bacterial phyla, with the added benefit that the activities of both enzymes are unaffected by dam and dcm methylation. However, both HpyCH4V and AluI generate blunt ends, precluding these REs from use in experiments where sticky ends are needed for biotinylated dNTP incorporation.

Among REs with 6-bp recognition sequences, EcoRI and BspHI appear to be the best choices for enzymes with minimal phyla-level bias in cut frequency. Additionally, both of these enzymes generate 5’ overhangs that are amenable to polymerase incorporation of labeled nucleotides, though BspHI cutting is impaired by overlapping dam methylation.